The points you earn from your time on a map is the sum of the points awarded from each of these 3 systems described below: WR/top10 points + formula points + group points.

The systems described here are complete; we are in agreement that this is what the Ranked-Points should look like. The values chosen for percentiles, WR points, etc. are still up for debate; however, these should be simple to change later, should we decide to change them, because of the design of the system. For now, we consider the values to be informed-guess placeholders.

There are no “base completion points”; the formula system somewhat accounts for this, but we’ve determined that it is not worth having a system of its own

Times ranked beyond the top10 are awarded points according to 2 systems: the Group system, and a Formula system. The group system rewards discrete bundles of points for players ranking within certain “percentile” blocks. The formula system awards points simply according to a formula with a single parameter – the player’s rank. The group system should award more points than the formula system; it should be the primary goal of the player to improve to the next group. The formula system simply provides bonus ranked points for improving within a group, so the player does not feel like intermediate improvements are a waste of effort.

WRs award a fixed number of points for all maps. For now, we set this to be 3,000 points. Ranks 2-10 award some percentage of the WR points. 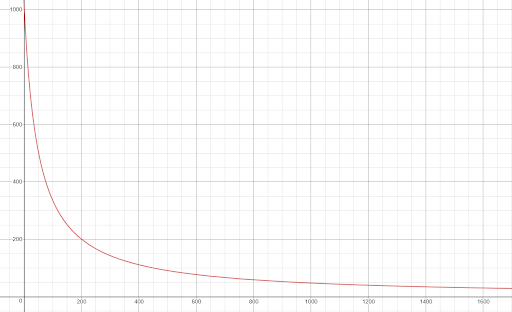 4 groups, loosely “percentile”-based (in fact, a function of #completions, but not as simple as a percentage). Instead of calculating group boundaries directly from percentiles, we calculate group sizes based on a simple maximizing function –

max(A, B) simply returns the value of the larger parameter.
A is a function of #completions, minSize

Group 1 always starts at rank 11, and its size is determined from its group size formula.

minSize is another parameter which varies per group:

Group Points:
(going by WR points = 3000) (no particular pattern; eyeballed). Keep in mind that you also get points from the formula!